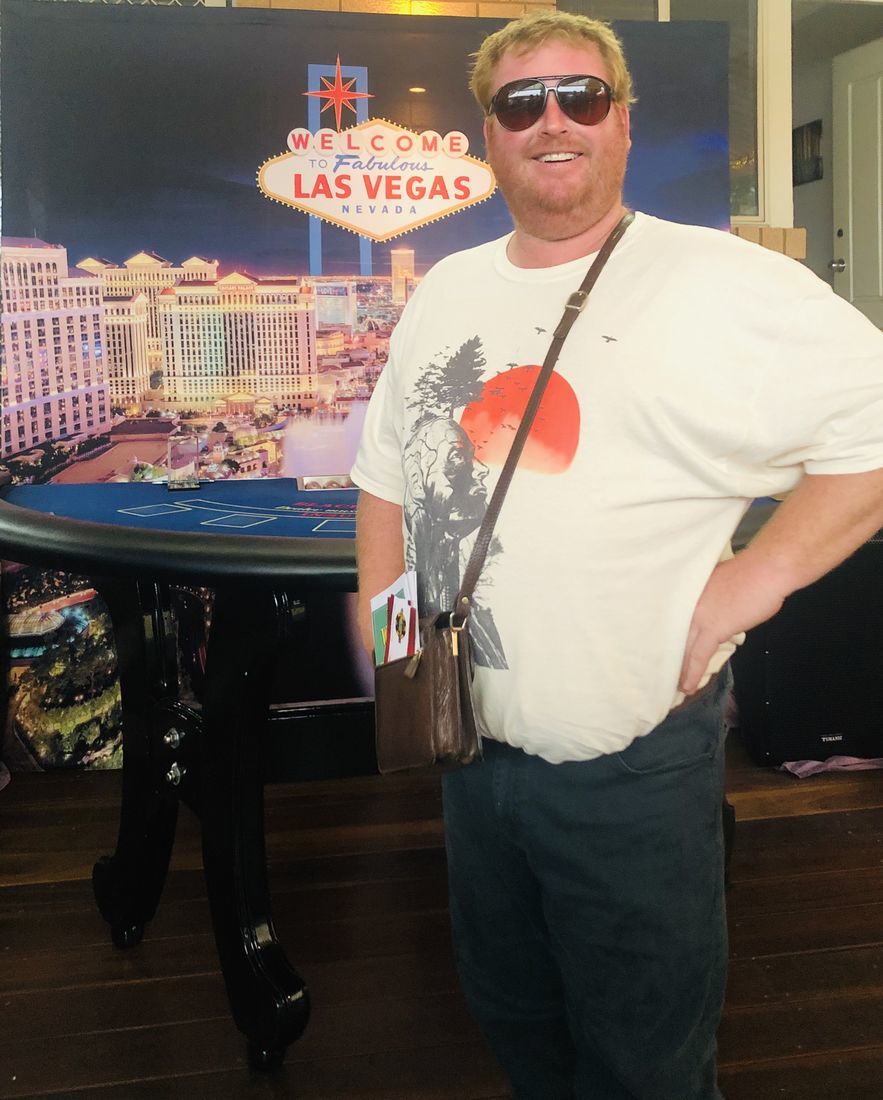 Firstly, the handsome gentleman pictured is Mel's husband, Damien, he played the character of Alan from the Hangover to absolute perfection. No offence to Damo, but I don't think he had to try too much, his physique and walk was a splitting image of Alan's. Damien also managed to get the same t-shirt, satchel and The Greatest Blackjack Book in the World and looked the part to 100%!

I'll move on, this post wasn't meant to be all about Damien!

Our event was a 4 hour call, which we try and talk our guests out of most of the time as 4 hours can really drag on sometimes. Guests can get disinterested and us as dealers get tired and can sometimes struggle to give 100% over a 4 hour period. I mean really, you try smiling, making jokes, standing on your feet, being the only sober one at the party for 4 hours straight!

But you know what, this particular event I swear we could of went another 1 or 2!!! I thought I'd never say that!

The guests were extremely polite and an absolute pleasure to deal with. Although most of them were in debt to the house towards the end of the 4 hours, they weren't taking the piss by asking for another 10,000 note every 2 seconds, they were taking their time, learning the games and having fun.

Mel the Birthday Girl was one of the nicest people we could ever deal with. Such a humble and beautiful sole and it was a pleasure to give her a 40th she'll never forget and will probably struggle to top for her 50th!

Mel had a turn of dealing Blackjack, spinning the ball on Roulette and calling 'No More Bets' and even held the Craps stick on the Craps Table (Craps is a little tricky to learn but she had fun holding the stick). We took photos of her at each of the tables and posted them on Facebook and she absolutely loved them and received many comments!

I say it over and over to our clients, yes we may be a little more expensive than other companies, but you won't get interaction and engagement at the tables anywhere else like Vegas Nights. For milestone Birthdays, Corporate Events, Fundraisers or Weddings - pay the extra few bucks, pay for quality, pay for the memories you'll treasure forever, you won't regret it!!!